UPDATE
It was suggested that the Dragon Challenge Queue be themed as the stadium from the fourth Potter film.  It made sense, so that's what I did: One of the trademark features of what I term “Tier II” theme parks (e.g., Busch Gardens or Sea World) is the naked steel mega coaster.  Sometimes these coasters feature elaborate, well-executed queues (e.g., Manta or Dueling Dragons) or trains, which is part of what separates Tier II parks from Tier III.  However, there is little else done to theme the actual coaster superstructure:
Pic 1

I’m not deriding Tier II parks & theme-ing.  These places & rides are popular, and there is certainly a place for them, but my interests lie in the elaborate theatrical designs that mark Tier I: lands, attractions, or in this case, rollercoasters, that attempt to wholly sell another time & place throughout their design & execution.

The much-discussed Wizarding World of Harry Potter offers a juxtaposition of these two models (Tier I & Tier II).  Several of its areas & vistas (& flagship attraction) are contenders for best Tier I themed environment on the planet:
Pic 2

At the same time, the land’s eastern backdrop is a huge, naked steel coaster:
Pic 3

In addition, the Forbidden Journey’s enormous showbuilding is an eyesore from a number of places within the park:
Pic 4
Pic 5
This blog is all about idealizing the parks, so I created another birdseye illustration to show how the all parts of IOA’s Wizarding World might be brought to the Tier I level. 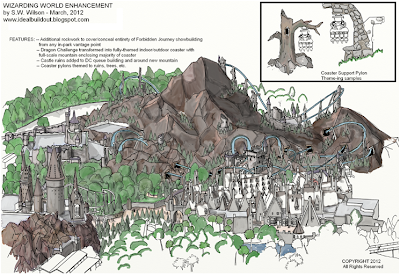 A note on mini-coasters:  I generally give lightly-themed mini(kiddie)-coasters (Flounder’s Flying Fish, Barnstormer, Flight of the Hippogriff, etc.) a pass because they are small enough not to overwhelm their surroundings.

However the Dragon Challenge is no mini-coaster.  It is huge and shatters any illusion a visitor might have that he is in the Scottish highlands that surround Hogwarts… it states clearly and loudly: you are in an amusement park.

So with this illustration, I imagined a very large mountain strewn with castle ruins and stunted pine trees that envelops the dueling coaster tracks.  The ride would pass through caverns, dungeons and other interior show spaces, sometimes emerging into the daylight for high inversions or near collisions.  In addition, the pylons supporting the outdoor track of this suspended coaster would be heavily themed to castle ruins, crumbling walls, old tree stumps.    The tracks would be painted a in a background blending scheme, so it might appear as the distant coasters are snake-like dragons flying around the mountain & ruins.

It’s rare to achieve the “100% convincing” level in a theme park… and very difficult (and expensive) to make a huge suspended coaster work convincingly in a fantasy environment (never been done to my knowledge), so I think if you get 75-80% there, it can be called a success.

***
Other changes in the illustration include a raised, forested berm around the edge of the park and enough additional rockwork on the Forbidden Journey showbuilding to keep it concealed from any vantage point within the park (on the ground).
Posted by SWW at 12:12 AM 29 comments: