For the next entry in my Wishful-Thinking-Birds-Eye-Illustration series (previous entry Tokyo Fantasyland viewable below), I decided to tackle Animal Kingdom’s Dinoland.  This is an area with great potential but in need of some serious work (IMO) to fulfill it.  Here is my illustration of a Dinoland Reborn: 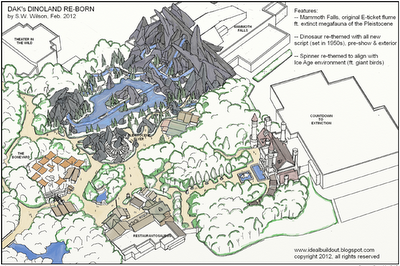 The most visible change is the replacement of DinoRama with an area dedicated to the Pleistocene and featuring a glacial lake and giant jagged rock formations.  The major experience here is Mammoth Falls.  Designed to both educate & thrill (and experience-driven rather than plot-driven), this E-ticket flume extends the “Extinct Animals” section of DAK beyond dinosaurs.  Guests travel back to a meticulously recreated North America of 10,000 years ago: an age when primitive man co-existed with giant mammals.

The experience begins in the queue, a soggy pine & birch forest, at the close of the Ice Age.  Entering a cavern, adventurers hear the sounds of giant beasts and come upon a large room covered in cave paintings (Lascaux).  The paintings become animated as a Shaman-like voice describes the natural world of this era.

Boarding giant tree snags (at least 4-riders wide, with four or five rows), guests then experience scene after scene of pre-historic wonders… escalating in scale, detail and terror, until the climactic 50-foot plunge.   The ride portion starts with peaceful mastodons and a family of American Lions, then passes a Dire Wolf attack on a Giant Elk, a Mammoth herd, giant ground sloths, etc.  As the boats rise to the final drop, guests pass the new apex predator – man – as a primitive hunting party plans an attack on a weary mammoth.  The final scene reflects the extinction of the megafauna and their replacement with mid-sized mammals we know today (deer, black bear, etc.).

***
The Triceratop Spin is re-themed to compliment Mammoth Falls: an aerial spinner based on the giant extinct birds (like the predecessor to the California condor).  Its queue is within the rocky cave-nest of such a bird.

***
The final major change is to Dinosaur.  Any connections to the Dinosaur film are discarded, including the ride name (note the removal of Aladar and return of the original Styracosaurus statue to the plaza).

I feel Period is always easier to sell and maintain in themed design than Present (and often more compelling), so this attraction (and the land as a whole) is set in mid-20th century America (Golden Age of Palentology?).

Gone is the mundane, postmodern, low-rise Dino Institute (and signage) that exists now.  It is replaced with a gothic, multi-turreted, brick museum building intended to evoke a stuffy Smithsonian or AMNH.

Inside are dusty, old-fashioned dinosaur exhibits, and the pre-show would take place in the fossil preparation laboratory.  Secret book-case doors (because who doesn’t love those) would then open leading to the Time Travel sub-level, full of 1950’s style scientific equipment and re-designed rovers for a re-designed adventure (following the same path).

For all of the superlatives Tokyo Disneyland rightly deserves, it has maybe the least aesthetically-pleasing Fantasyland (and Tomorrowland) of all the parks.  While some parts of TDL’s Fantasyland are very nicely-designed (specifically, the area right behind the castle, the two newer areas: Hunny Hunt and Queen of Hearts/Teacups), a significant portion of the land suffers from the plastic “tournament tent” façade dressings and wide open, oddly-flat areas with few trees or visual breaks.   There is also the presence of the Hudson Valley version of Haunted Mansion, which is really-nicely themed, but ill-placed).

If you are not familiar with Tokyo’s Fantasyland, here it is:

So I drew a birds-eye illustration of what I thought a reasonable re-vamp of Fantasyland could look like: 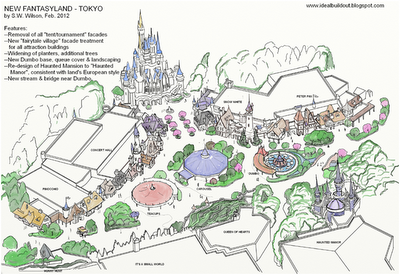 Gone are all the fiberglass tournament facades, replaced by a diverse fairytale village (the one tall tower is meant to recall Rapunzel, though not directly based on “Tangled”).

I narrowed the pathways by expanding the landscape areas, adding lots of trees, particularly around the Carousel and Dumbo (which are desert-like in their current state), making the land feel a more forested & cozy.   Dumbo receives an updated centerpiece & queue cover and is now surrounded by a lush sunken stream, giving the land some much-needed topography (something similar is done in Paris).


The most expensive part of this proposal would be to change not only the façade of Haunted Mansion so it becomes a medieval European manor (befitting Fantasyland), but also the ride itself (in the same way Phantom Manor is a Western take on the HM).


A best-in-class park like TDL ought to have all of its environments excellently-rendered, and Fantasyland - in its entirety - is not at that level.   I had hoped that when Philharmagic was being installed the opportunity would be used to continue moving the land's design in such a direction.