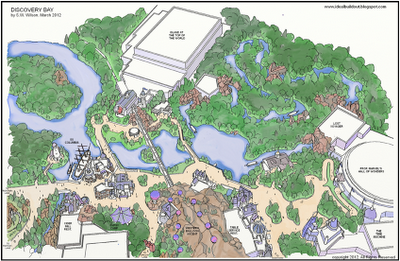 This next entry in my Wishful-Thinking Birdseye Illustrations For Your Enjoyment series shows my own version of Tony Baxter’s & WDI’s legendary Discovery Bay concept for Disneyland.  I drew this based on one of my conceptual site plans for an expanded park: 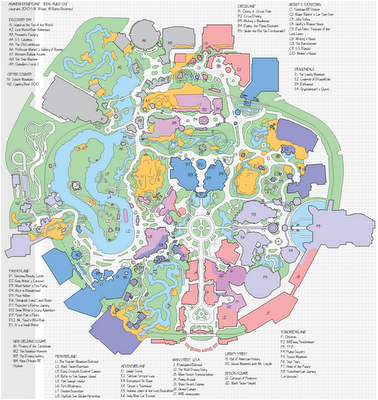 My version has a lot in common with the WDI plan(s) upon which it was based, but also differs in many ways.  The setting of the place is vaguely Victorian (1850-1900) with an eclectic mix of architectural styles (Gold Rush/Barbary Coast S.F., Chinatown, “Age of Invention”)…  an American version of Port of Entry at IOA.

Attractions
Island at the Top of the World: Flagship suspended dark ride based on the actual WDI plan.  If you're unfamiliar with what this ride was to be, some really  tantalizing descriptions can be found on the Web.

Lost Voyager: This is my own take on the boat ride of many names that was planned for DB at one point.  The version I've drawn is Jungle Cruise meets Dinosaur, featuring frightening encounters with mythical creatures in caverns and (temperate) forested locales.

Professor Marvel's Hall of Wonders: I imagined this being a fanciful Carousel of Progress-type presentation hosted by Dreamfinder's precursor (something similar to this was planned).

The Time Machine: This would be a steam-powered, riveted simulator adventure with in-cabin SFX.  The exterior would be a dilapidated Academy where a few mysterious inventors still linger.

Western Balloon Ascent: This would be a gentle balloon ride that "floats" over the mountain (covering the train and several showbuildings) along an inground track hidden below the baskets.

There would be several unique dining facilities, a tented Gypsy Camp for live entertainment, "Streetmosphere" characters.  In my version, the Indian camp would be relocated to Tom Sawyer Island so it could still be experienced by Mark Twain & Columbia passengers.

Discovery Bay would have access to the four adjacent lands (tunnel to Toontown).  All the Captain Nemo/Nautilus stuff in the original DB plan would be reserved for another Resort Gate.

This next entry in my Birds-eye Series illustrates some big changes to eastern side of Magic Kingdom: 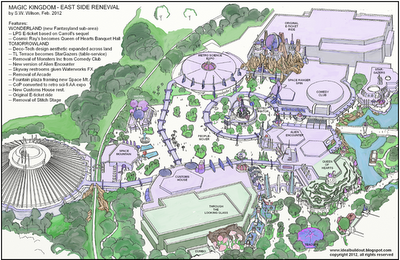 DECO-TECH VS. SAARINEN
The 1994 re-do of MK’s Tomorrowland, intended to evoke 1920s/30s pulp Sci-Fi serials like Buck Rogers and Popular Science magazine, introduced a new design style to theme parks, sometimes referred to as ‘Deco-Tech’ (featuring riveted metal plates, glass domes, mechanical palm trees, extra-terrestrial rock formations, etc).   I think this re-do was well-conceived and generally well-executed, including the brilliant Avenue of Planets night lighting package, the Astro-Orbitor and one of the best-ever pre-shows featuring the perfectly-programmed and -voiced S.I.R..

One thing that has always vexed me about the 1994 re-do, however, is that once you pass Rockettower Plaza, New Tomorrowland comes to an awkward end, and you’re back in Old Tomorrowland (clearly the land-wide alteration must have seen budget-slashing).  There are a few adornments around Cosmic Ray’s (including Sonny Eclipse), but most of the major visual elements (Space Mountain, the majority of the Peoplemover track, Carousel of Progress, the Speedway) remain mostly in the old 1970s style.

Themed lands are like orchestras, and while each section has different instruments making different sounds, they need to be in pitch in order to deliver a pleasing end result.  These two styles (Deco-Tech and 1970s Saarinenesque) do not harmonize:

So the first thing I did in this illustration of an improved Tomorrowland was apply the Deco-Tech architectural styling to the entire land (excepting the iconic Space Mountain).  For instance, I added metallic fins to the rear 2/3 of the Peoplemover.  I also added new spires, domes and other ornamentation to the land’s buildings
THEME COHERENCY
All of the attractions and dining facilities have been re-worked to make Tomorrowland a more coherent world.  For example, the Carousel of Progress and Monster’s Inc Laugh Floor contain subject matter can’t be easily reconciled with this pulp sci-fi Spaceport, so they are changed out.   Laugh Floor remains a comedy club but is populated by intergalactic comedians.  CoP remains a rotating AA theater, but showcases retro-futuristic vignettes.   I mentioned my affinity for S.I.R., so he returns to a new iteration of Alien Encounter (Stitch gets the boot).  Space Ranger Spin remains but is given a new, grander marquee.  Tomorrowland Terrace is re-tooled into a Deco-Tech restaurant (table service in evenings) based on retro-astronomy (as was originally planned).

APPROACH TO SPACE MOUNTAIN
It goes without saying that in this imagined version of TL, Space Mountain, grand-daddy of Disney thrill rides, gets the heavy duty rehab that was deserved, planned and then scrapped a couple years ago (all-new tracks, vehicles, FX, on-board audio, darkness, etc.), but that can’t be shown in this illustration.  What can be shown is the new approach to Space Mountain.

One building that never sat well with me was the barrel-vaulted arcade plopped in front of the Mountain in 1994.   It’s not so much the structure itself, which is okay in isolation, but its oversized-ness and placement.  Space Mountain should provide a larger-than-life backdrop to the land and be made to look even bigger than it is (forced perspective).  Attaching a large, out-of-scale building to SM’s front side damages that perspective:
In my version, shorter, more-detailed deco-tech facades mark the entrance to SM.  There is a large fountain and two reflecting pools in the plaza, befitting a flagship attraction of the park.  (Note the WDW Railroad passes through alien rocks like those found at the entry, bringing visual cohesiveness to the land).

WATERWORKS
When DisneySea created new bathrooms in its New York section, they looked like this:
When MK changed the old Skyway station into Tomorrowland bathrooms, they ended up with this:
As brilliant as the latter’s theming is, I thought this would be a good opportunity to put in some SFX water-features.  The roof of the bathrooms would hold giant glass spheres overflowing with colored liquid which also runs through pipes and out of the building into the ground below.  These kind of touches add up to be big differentiators in theme parks.

NEW TL RIDES & FACILITIES
The large parking lot behind Main Street becomes home to a new epic E-ticket (kuka/EMV) based on an original story & characters in tune with the land’s setting.  Among the visual motifs that connect Tomorrowland are spheres, spires and mocha alien rockwork.  Here all these elements combine in what appears to be an ancient alien temple/mysterious structure and a giant spherical artifact that holds the secret to saving or destroying the galaxy.

The Speedway is gone, ridding the area of fumes, noise and an attraction that is the antithesis of Tomorrow.   Most of the land is taken up by a new E-ticket ride for Fantasyland.  But the Tomorrowland portion holds The Customs House (dining, retail, etc.) for intergalactic travelers (arriving from Space Mountain).   The restaurant would be something akin to the Star Wars cantina with the Peoplemover open to diners below.

WONDERLAND
Wonderland becomes the fourth sub-land to Fantasyland (joining Storybook Circus, Fantasy Forest & the Walled Town).   The major alteration to existing structures is the conversion of Cosmic Ray’s to a restaurant based on the Tokyo DL’s Queen of Hearts Banquet Hall:
If you’re not familiar with this excellent piece of themed design, check it out on Flickr.  This change eliminates the last of the incongruous architecture from Tomorrowland and creates a unified entry point to Fantasyland (as opposed to the confluence that is currently there).  Note the wavy bridge.

The second half of the former speedway is occupied by an E-ticket LPS attraction (Hunny Hunt) based on Through the Looking Glass (Carroll’s sequel to Alice in Wonderland), rendered in the Disney animated style.  This is so as to avoid a book-report ride on the animated film and create an original, further-adventures-of attraction.  The queue/façade/exit of this attraction are the grounds of a fanciful English manor home and a forest of giant mushrooms.  These are positioned to block sightlines to the back of the queue building of the new Dumbo.

The new Northern Gateway to Tomorrowland has two ‘Waterfalls of Light’, an homage to original spires that once stood at the hub entry of TL during the MK’s opening.

Thoughts on these changes?  Improvements you would make?
Posted by SWW at 9:26 AM 14 comments: