I'll sometimes swap out lands and attractions in concept plans, and in this case I imagined that a Pacific Islands themed port, based mostly on Moana, would be a fun alternative to the Mermaid Lagoon port that had been done once in Tokyo.

There are similarities with the previous port (Mermaid) in that there is a kiddie coaster (re-themed to a coconut grove) and a character-based spinner outside (re-themed to the pig and chicken from the film).  And a large indoor space: I imagined a network of torch-lit caverns under the mountains (as seen in 'Moana', where she discovers the ancestors' canoes) that houses some retail, dining, restrooms, etc.   There is also a major attraction found in the caverns: an outrigger canoe simulator (mini-domes)  with water-effects that take riders across the wild ocean to mythic locales. 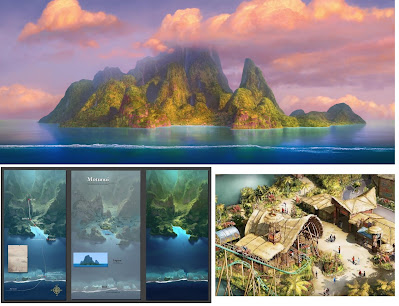 Built atop of the cavern amid the lush peaks of Motunui (and Hong Kong) is a rapids ride.   A  waterfront-dining venue based on the chief's huts rounds out the features of this port.

^I did a Studio Ghibli land for a WDSP re-imagining. I'll probably update it an post it to twitter in the future.

I wonder if you do an Reimagined WDSP with Star Wars, Frozen & with a lake/Lagoon but also with new lands that fit the park. but not an Mickey Mouse Lagoon

^I started one for the forthcoming WDSP changes but got bored with it being a random copy&paste IP park and stopped. I'll probably pick it back up in the future when more is complete/known.

What does LPS mean in “LPS dark ride”