Shanghai: The Hotel at the Gate

This is one a few Shanghai drawings in which I look at filling the hotel pad near the park's entrance. 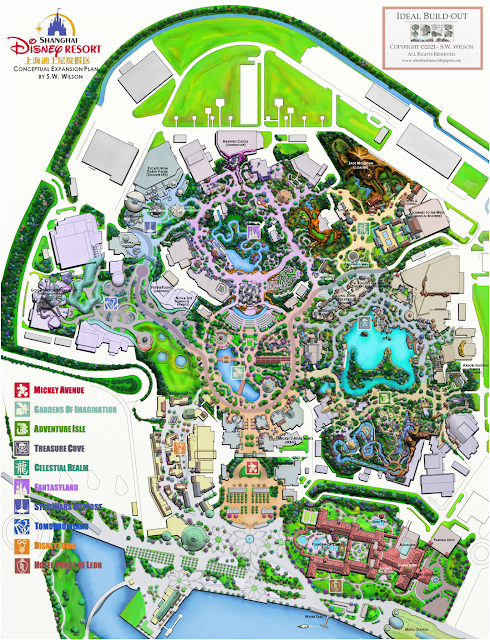 The most important consideration for a hotel is that it enhances resort-wide and in-park vistas.  It needs to be On Show from almost all angles and elicit wonder and delight in passerbys as well as hotel guests.  This is what the great hotels do so well (e.g., MiraCosta, DLP Hotel). 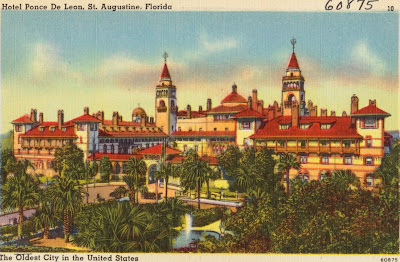 Where the hotel would impact the park the most, visually, is in the adjacent Adventure Isle and very wide vistas from north Treasure Cove.   While I also added a forested berm to hide the back workings of Adventure Isle, the hotel's taller parts, like its many parapet towers, could likely be glimpsed from the park.   But such visual intrusions add a unique, surprisingly-appealing, mystique to theme parks that I've grown to appreciate (it's the back-stage & non-show intrusions I decry). 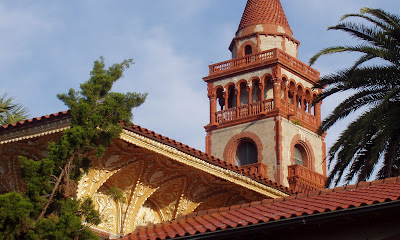 Another consideration is that, connecting to the Entry Plaza/Mickey Ave, that a hotel tie in with that area too.   Mickey Avenue is generally eclectic American, early 20th C..   Adventure Isle is exotic.  So the hotel should be Exotic/American early 20th/late 19th.  Here I settled on Spanish/Moorish revival as both American and Exotic and created an enlarged riff on the magnificent Ponce de Leon hotel of St. Augustine in a similar way to how the Grand Floridian riffs on the Del Coronado. 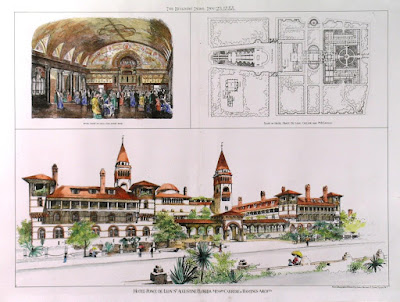 The hotel would feature all the rich and magnificent detailwork, both inside and out.  Manicured grounds feature winding pathways, garden courtyards and a large Fountain of Youth central pool complex.

One of the things I most appreciate about this land is that the majority of it is IP-free and was invented for the park, something which has become almost unheard of at today's Disney.   My plan uses the last, small expansion pad to continue the story & placemaking of the Arbori People by adding a top-spin, heavily-themed as an ancient Arbori temple/machine. 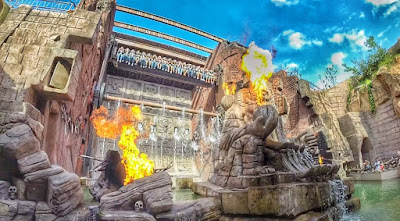 This plan aims to fill in a lot of SDL's interior picnic lawns with on-show content.  Here, two of them get converted into a 2nd pirate village area with walkthrough attraction, bar/dining and a shooting gallery. 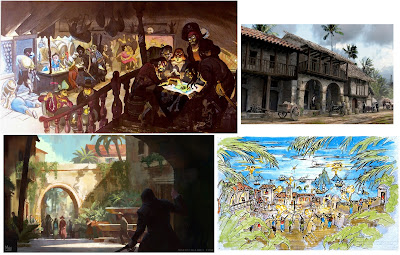 Looking at the overall plan of SDL, the large expansion area behind Seven Dwarfs Mine Train should have been saved for a tall mountain attraction, because the vista from the castle of the foothills (SDMT) in the foreground and the tall peaks rising behind them would have been sensational.  I've seen an early official plan where Everest was a placeholder back there.  We'll see how the Zootopia vistas are. 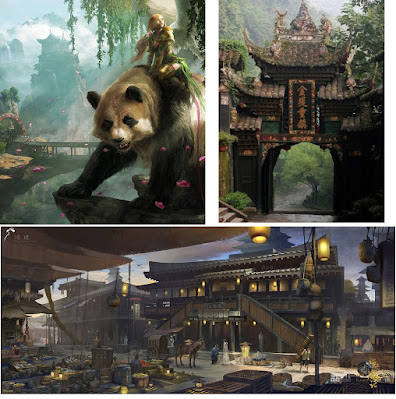 In this plan an original E-ticket coaster called Jade Mountain anchors a land themed to Chinese myths and legends.   There is a family boat ride and a spinner as well as retail and dining.

The big new addition here is SDL's haunted house attraction.  As Mystic Manor did for HKDL, this is a new concept - but still accessible and musical - for the staple Disney attraction.   The attraction is reached by queueing up a ridge and across a rope bridge over the main pathway towards the decaying castle. 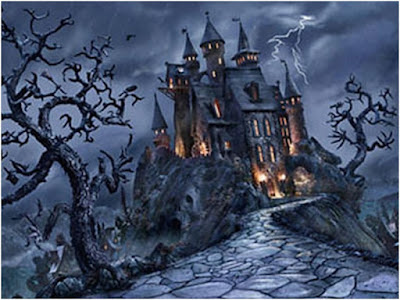 I added an Old Mill Ferris wheel B-ticket to fill in some of the empty picnic lawn space.  Smaller changes include a full-size Dwarfs Cottage for the mine train (the existing gray screen mini cottage is not as effective as WDW's full version with witch) and adding castle ramparts & crenellation to the upper levels of the show-buildings on the western village side.   All the other Fantasylands do this to effectively disguise the showbuildings as castle ramparts, whereas Shanghai - perplexingly - broke with precedent and themed the upper buildings as large 'fairytale warehouses'(?).

Replacing Toy Story Land is a unique Star Wars miniland set on its own planet with original attractions and features.  Timeline is Original Trilogy.   Falcon is a walk-through.  Darth Vader is the antagonist for the set- & AA-based based shooter LPS ride.

East of the pathway are more rides and features to fill in the empty areas of the park.    The major addition to the land is a freefall darkride based on Guardians of the Galaxy: Mission Breakout.  It's hard for me to square DCA's Tower of Terror building with the GotG overlay at DCA, so I think I would appreciate the attraction much more this with a custom, original landmark tower that feels like GotG and also complements the existing Tomorrowland style.

Fantastic, I love this architectural style and love how it works with its surroundings.

On a different subject.

What do you think of the Disneyland forward political campaign to the city of Anaheim? It’s obvious they are trying to show the extent of where they believe they can expand without land purchases. And it’s clear they have the intention of expansions to Disneyland and DCA rather than creating a third gate. I think it’s smart.

My thought is a third gate at this point would be a drastic land purchase measure. Either purchasing the A’s stadium property and surroundings or revive the project at Long Beach harbor.

What are your thoughts toward existing park expansions/purchases to revive third gate blue sky ideas?

Hi Jared,
I thought it was an interesting idea to have 2nd entry points for each park (like EPCOT has) but I'm not a fan of Project Stardust, aka taking out trees, planters, widening pathways, removing features and diminishing the charm & intimacy of Disneyland in the name of wedging even more people into the park. I'd prefer the integrity of DL be maintained. Will be interesting to see what these new areas will entail, if they ever move forward.

In an ideal world I still think the best way forward would be having a 2nd and 3rd gate that equal or surpass the original park in appeal (which is what EPCOT and MGM did for my family in the 80s and 90s at WDW: MK became an afterthought).

But in reality, I prefer the new plan to building that bland, cancelled hotel in one of those plots. A third gate in the nearby lot faced the difficulties of be awkwardly-located and under-sized unless Disney buys up & clears blocks, which is unlikely.

What happened to your other posts?!?! There used to be more

Thats awesome for GotG: Mission Breakout at SDL. Hey in a couple of posts & projects you doing next, don't know yet but hoping your doing Hollywood Studios or California Adventure please.

So, curiously, how does this plan address the parade route bisecting the star wars outpost?