Here is a What-If concept plan for Hong Kong that incorporates some logos I made for the new lands.

HKDL has - beyond all initial expectations - morphed into the Castle Park I'm most positive about.   While the other parks, developed over decades, have included many big steps forward, there have also been many big steps backward, in my view.  But HKDL started out with so little, that its forward progress has eclipsed any back-steps. 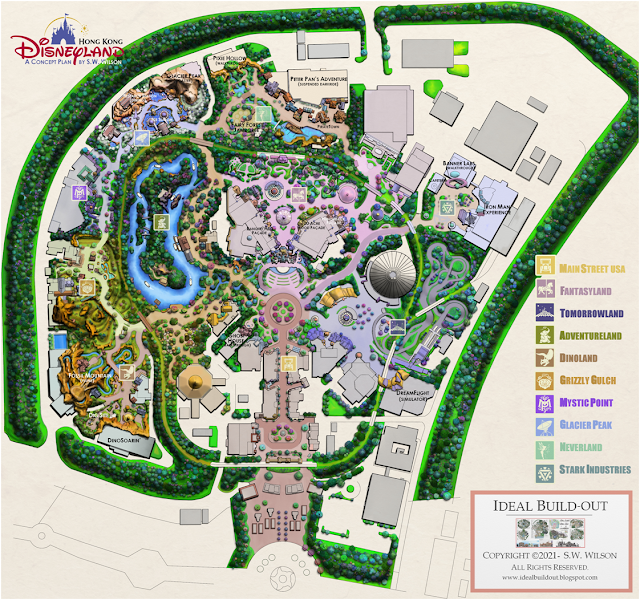 The park greatly benefits from its insulating forested Berm - something Shanghai desperately needed and all parks should have.  The visual storytelling element of the Great Green Beyond (a forest/wilderness backdrop) is a concept that reinforces and helps sell every aspect it touches in a theme park.   HKDL's vegetation growth has been exceptionally lush: I'm a big fan of trees in general and their benefit to the parks, particularly as they get older.  HKDL also has the mountains in the background, which add so much to the wide vistas.   And it has the series of mini-lands outside the railroad which give it a unique layout that is fun to plan - swapping mini-lands here and there.

The addition here is a walkthrough Ghost House inspired by the original concept for Haunted Mansion (below). 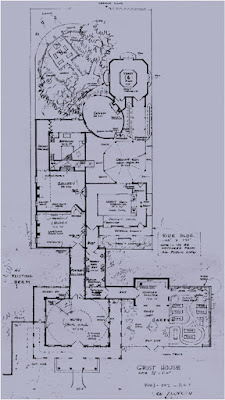 Marvel is moved to its own mini-land.   The new non-IP DreamFlight ride has a facade that builds on the wavy canopy motif of the existing TL buildings.

I've added the new castle.  All the current fiberglass tournament facades are replaced by themed architecture, as in the 1983 Re-do of Anaheim's FL.

The only change here is the removal of the Moana stage... I prefer the area uncluttered, with just paths, stream and vegetation.

This land is set in the American Southwest (a fitting neighbor for Grizzly Gulch).   There is a log flume E-ticket and a Soarin ride over and through a Prehistoric Earth of 100 million years ago (photo-realistic CGI).

This area is a translation of the Favilli Studio proposal for the mini-land, which you can find online, with dueling spinner and mountain coaster. 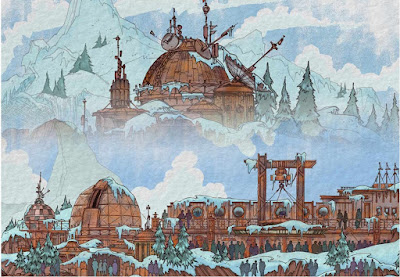 An alternate choice to the Frozen area being built.   The left-hand side is based on the cancelled area for the Magic Kingom (see below). 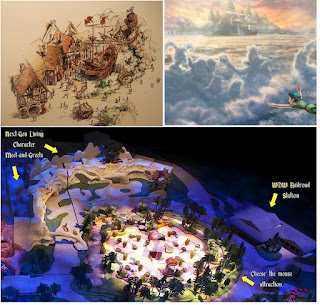 This mini-land has the Iron Man ride and an interactive game/exhibit area called Banner Labs, in addition to a Quick Service dining option.

Thanks for this alternate HKDL. I would love to see a park entirely consisting of mythical kingdoms, like Neverland here, but fully fleshed out with 2-3 attractions. Basically a full-scale buildout of the upcoming Fantasy Springs at TDS, where they're already doing Neverland, Arendelle and Corona - in addition to the existing Atlantica (Mermaid Lagoon) and Agrabah - well, technically Arabian Coast, but two of its four attractions (Jasmine's Flying Carpets and the Magic Lamp theatre) are based on Aladdin- if they'd made Aladdin the main character of the Sindbad ride it would be a complete Agrabah. They also have a complete Beauty and the Beast land across in TDL. Add an Alice's Wonderland (teacups, dark ride and a maze) and you would have 7 lands. Of course, I'd like to see some new lands like Snow White's kingdom (the dark ride plus the mine coaster), Sleeping Beauty's kingdom (a dark ride and a spinner), Dunbroch from Brave (an archery shooter and a forest coaster)...

What happened to your other posts?!?! They’re used to be more. Like Disney’s America or the spires park. All that was really interesting

I was diagnosed of Herpes a ago and I have tried all possible means to get the cure but all to no avail, until I saw a post in a health forum about a Herbal Doctor(Dr Akhigbe) who prepares herbal medicine to cure all kind of diseases including Herpes, at first i doubted, if it was real but decided to give him a trial, when I contacted Dr Akhigbe through his Email: drrealakhigbe@gmail.com he guided me and prepared a herbal medicine and sent it to me via courier Delivery service,when I received the package (herbal medicine) He gave me instructions on how to consume it,I started using it as instructed and I stopped getting outbreaks and the sores started vanishing, could you believe I was cured of this deadly virus within two to three weeks and notices changes in my body. Days of using this REMEDY,couldn't believe the healing at first until I see it as my HERPES  get cleared like magic Dr Akhigbe also use his herbal medicine to cure diseases like, HIV, HERPES, CANCER, ALS, CHRONIC DISEASE, HEART DISEASE, LUPUS, ASTHMA,  DIABETES, MAR-BURG VIRUS,  HEPATITIS A AND B.ECZEMA, BACK PAIN, EXTERNAL INFECTION , BONE/JOINT, ASTHMA, MALARIA, DENGUE FEVER, BACTERIA DIARRHEA, RABIES, OBESITY, PROGENITOR,  MENINGITIS, ARTHRITIS, EPILEPSY,STROKE, LYMPHEDEMA, GALLSTONE, DICK AND BREAST ENLARGEMENT, PULMONARY HYPERTENSION, PENIS  EJACULATION, ,   HPV, DICK ENLARGEMENT, IMPOTENCE, DENGUE, TETANUS, CORNELIA DISEASE, OSTEOPOROSIS, RHEUMATISM, THYROID, COLD & FLU,KIDNEY DISEASE,ACME. AGORAPHOBIA, MA;LARIA, PROTOPLASMIC  ERYSIPELAS. etc Contact this great herbal Doctor today the father of herbal root cure. via Email: drrealakhigbe@gmail.com or whatsapp him  +2348025012866   and get cured permanently He is real..website:      https:drrealakhigbe.weebly.com