MAIN STREET, USA:  Per usual, this plan reverts to Main Street's original slate of unique shops and features which have been steadily deleted over the years in the name of more shelfspace for Disney merch.  Main Street Motors displays and sells vintage autos.  The Photography shop stays as an exhibit dedicated to early photography.  Walt's restaurant is in its original incarnation, with first floor dining room. 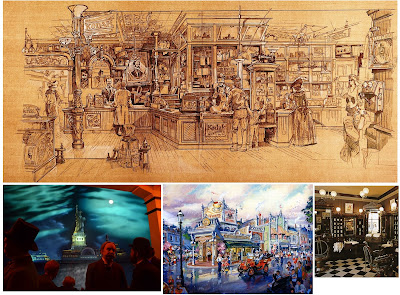 The Barber Shop and Statue of Liberty diorama exhibit remain in their places.

FRONTIERLAND:  Indian Canoes & Keelboats are back.   Lucky Nugget vaudeville show is back (sans Disney characters).    In the large pad beyond the railroad berm, a new district is added: a dusty and dangerous gunfighter town called Redemption.  The Saloon is themed dining populated with live characters out of a classic Western.  There was originally a Stunt Show planned for Frontierland, so I've included that.   The main draw, marked by an old Spanish Mission, is a high-tech E-ticket inspired by some concept art by Chris Bradley, where stagecoach riders have rifles and shoot at targets and villains throughout the ride. 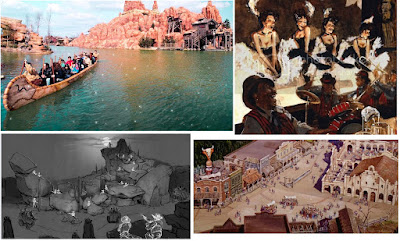 So you'd have Thunder Mesa, with its elaborate backstory and attractions, then the rural Cottonwood Creek district and then a neighboring frontier Town of Redemption with its own rivalry backstory.

ADVENTURELAND: While the powers-that-be are big proponents of making everything "more Disney", I am not a fan of unnecessary IP insertion/overlays and/or changing the name of a feature to include a tangential character.    So in my drawings the restaurants (Aux Epices Enchantee, Explorers Club, Blue Lagoon, etc.) revert to their original names.  I'd also bring back the winding indoor Bazaar in its original form before it became the Agrabah Cafe - that area looked too cool.  Losing the Bazaar meant breaking up the "Covered Pathway" ( a stroke of genius).   I'd amend the Aladdin walkthrough to allow the Covered Pathway to go on its, full original course. 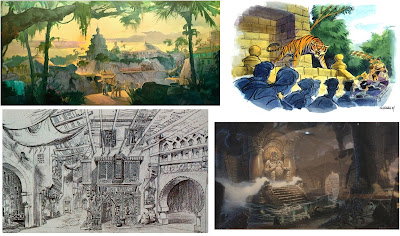 A larger, Jungle Cruise-inspired coaster - a concept that pre-dated Temple du Peril - is here.  Indiana Jones is a cousin to the EMV Ride found in Anaheim and Tokyo.

FANTASYLAND: I've added a dedicated M&G area and a fourth C-ticket darkride based on Tangled.  The larger addition beyond the railroad berm is Heroes' Quest - a park-originated flume attraction that creates a set of characters, story and world set in a medieval fantasy genre of wizards, knights, ogres, etc. 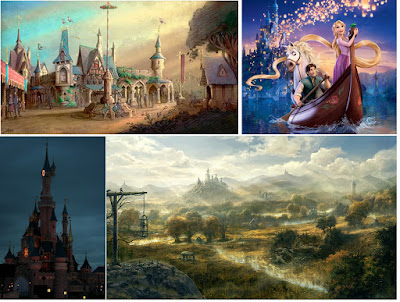 DISCOVERYLAND:  Discoveryland, originally dedicated to the retro-futurism of 19th-Century writers, had a few built-in flaws to its thematic cohesiveness from Day One: Star Tours, Videopolis & Captain Eo.  These  never fit the purported theme very well, despite the talking points.  In this plan, I've replaced those three attractions to reflect a tighter interpretation of the original theme.

The original Visionarium remains, serving as the thesis statement for the land.  Jules Verne's stories are reflected in the original Space Mountain: From the Earth to the Moon, the Nautilus walkthrough, and a new madcap, stylized, family darkride (a la Peter Pan/Mr. Toad) taking up the space used for Videopolis (Around the World in 80 Days).   H.G. Wells finds representation in a cabin simulator War of the Worlds: a steampunk Star Tours, with expanded storyline and design (not based on any previous treatment of the book, but something along the lines of WotW: Goliath, where humanity is using steam/deiselpunk technology to fight back against the invaders).   Similarly, Edgar Rice Burough's classic "A Princess of Mars" gets an E-ticket ride, but one designed for the park and that clicks with the feel of the land, not necessarily based on the look created by Bruckheimer's John Carter movie. 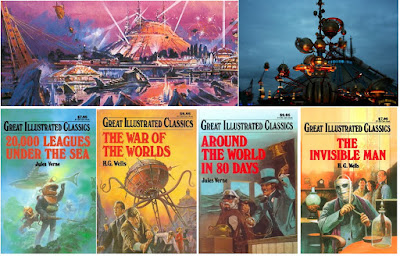 A major attraction, called Bon Voyage!, is based on idea once posted to the internet, but has since disappeared.  Some of you may remember this - and I don't know who to credit - but the concept came with artwork and even a pretty professional scale model.  It was a major suspended darkride aboard Airships, marked by an observatory dome and a curving grass-covered canopy, with the showbuilding beyond the berm.

Finally, since the land could use a major dining venue, there is a special-effects-laden table service restaurant themed to The Invisible Man (an alternate theme could be something like the old Jekyll & Hyde Club in NYC or Astronomer's Club).

I’m so happy to see you’re back with your art! have you ever considered drawing a plan for a fifth gate in Disney World?

Simply brilliant, SWW. Glad to see you've fired up the Ideal Buildout engines once more and established a presence on Twitter, where your work is hopefully getting wider exposure.
I think you've said it before, but it's a shame that Parc Disneyland wasn't built in Tokyo and placed under the care of both the Oriental Land Company and the Japanese parkgoer. While its thematic equal, DisneySea, has seen additions over the past several years which have added IPs into its roster, the additions have at least been done in a mostly tasteful manner. Meanwhile, Parc Disneyland was largely stagnant or outright neglected until Project Sparkle began for the 25th anniversary. Had Euro Disney not been a financial disaster, a built-out version of this park would almost undoubtedly be the crown jewel of the Magic Kingdoms.
I like the addition of the Redemption area beyond the train tracks in Frontierland, and I think it complements the existing land designed by WDI legend Pat Burke very well. An original shooter E-ticket would be fantastic. Likewise, Discoveryland's thematic purification and expansion would do wonders to solidify its lineup. But what's most important is the small things you've done—protecting the arcades, the covered walkway, and the beautifully-detailed restaurants—because that's what makes this park so special.
I do wonder what could be made of the Autopia plot long into the future. It's a sizeable tract, and something interesting and thematically-coherent (perhaps multiple, interconnected attractions) could be placed there if Autopia-style rides are heading the way of the dodo. Personally, I think a Verne complex featuring a gentle, indoor-outdoor balloon experience (think steampunk Peoplemover) along with the originally-envisioned Journey to the Center of the Earth freefall ride would be great. Regardless, the attractions you've added on the expansion pads fill out Discoveryland quite well.
Glad you're back and well done!

Thanks, PJ. I did a plan with the original indoor Discovery Mountain I may dust off. I think it took up all the Autopia space along with the existing mountain.

Also, a previously-posted Fifth Gate for WDW I may tee up soon.

Hey SWW either 2021 or 2022 i have three projects i would like to see in the future if its never happens, the first one is can you do Third Gate for either Disneyland Paris or in Disneyland California maybe DisneySKY liek in this link that D Hulk has made: https://forums.wdwmagic.com/threads/disneysky-complete.970136/ & the second is can you make a project of What If Shanghai Disneyland gets a second gate park.

^ Yes I'll give it some thought. That DisneySky drawing is really good.